I have pushed the third release candidate of my image builder for R64 on github.

It builds an image from scratch for running Arch Linux, Ubuntu or Debian on the R64. Thanks to Frank-W for his work, which helped a lot!

There are also pre-build images ready for download, see assets in the release. You can use these images as try-out. If you like it, then you can use the script later.

Note: With the emmc version, wan only works with bootswitch set to boot from emmc first! (see closed issues) 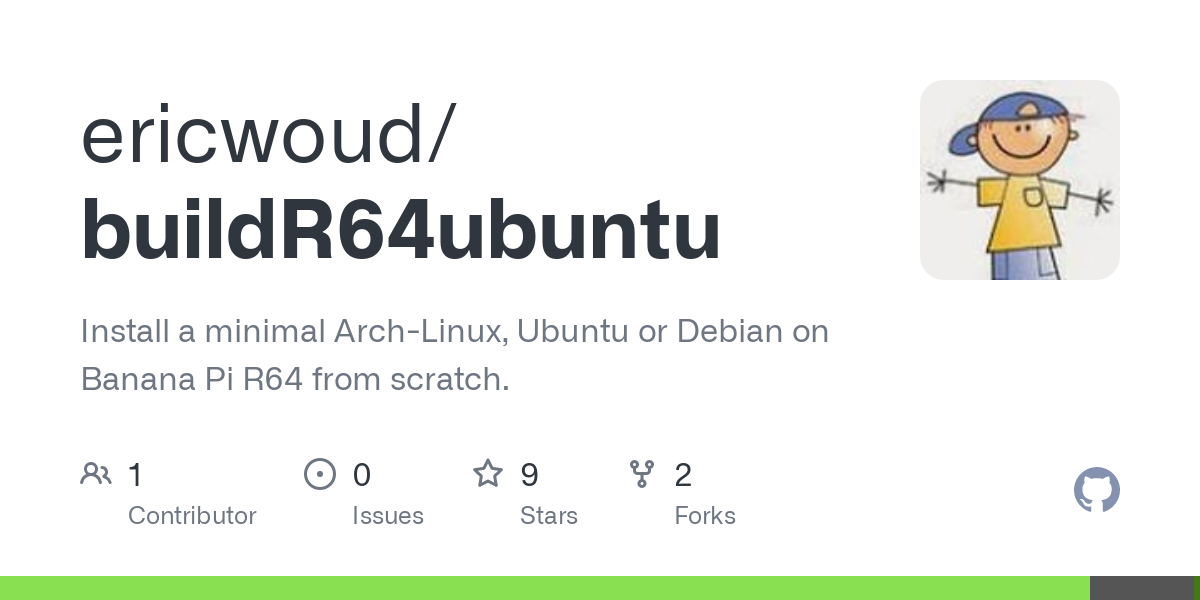 Hi,does it compile ubuntu-packages or does it do a debootstrap after generating the base image?

Btw. My name is written with “k” (also risk)

You use port5 of switch with gmac2? This does work with mainline without additional patches (except dts for port5)?

It only uses debootstrap, adding packages in an early stage. All packages pre-compiled from ports.ubuntu.com/ubuntu-ports

Patch mainline for port 5 only in the dts, no further patches… Only changes in network setup.

Have not performed any iperf3 yet.

Also feel free to use formatdefconfig.sh

First need to fix the CPU speed… It is way too slow. Work in progress…

Mtk-openwrt atf, mt7622-bpir64 branch, quite similar to yours I believe.

Ubuntu’s mainline, with a defconfig from your 5.12-main branch, which ended up with quite a few changes after performing a savedefconfig on it again… Anyway, had to start somewhere…

This not only in my image. I will open another topic, as this is not directly related to buildR64ubuntu.

For atf there is a newer version (branch soc),but i think there were no cpu related fixes…problem should be more in linux

I’ve tried that branch of atf earlier, but it hangs at reboot. Switching on debug messages helpes a lot, then it hangs ever 10th reboot or so… For now I dropped using that version untils reboots are stable.

Rebooting in about 15 seconds

And the BPI R64 is running again, ready to login again on ssh

Maybe we can use imagebuilder (build.sh) to build debian and for r2 too and using my kernel,uboot,atf (define branch/board to use)?

The main goal was to use as much as possible mainline repositories, but to have it configurable for other choices All patches are in the corresponding folders in the buildiR64image repo. This way everything that is deviating from mainline/default is to be found in 1 repo in readable source code or patches.

I can easily adapt the script so that the origiin of the kernel source is configurable. It already is, but never checked with Debian kernel or torvalds kernel, only ubuntu kernel different versions

I believe the difference for ubuntu or Debian is also not so big concerning debootstrap so this is also possible.

About the R2 I think this would be such a change to quite a lot of aspects of the script, I believe it would be better to write a R2 version of the script separately. It will help keep the script more simple and clear.

In my repo there are some patches for better hw support like bluetooth,pcie for r64 and wifi for r2.

So it would be good to have ability to use my repo and maybe use build.sh for building.

I do not want to add all patches as patchfiles.

How do you compile/install kernel to your image,maybe i can change build.sh a bit

Will add possibility to debootstrap Debian instead.

Kernel is build in the same way as you already build yours.

Thanks,i dont’t know if bpi-r2 boot chain works with gpt,imho uboot needs to be at fixed offset loaded by preloader. at least my r2 uboot is not prepared for gpt.

Btw. Here you have a warning resulting in calling build.sh self again and will cause endless loop due recursion: https://github.com/ericwoud/buildR64ubuntu/blob/master/build.sh#L412

Luckily there is an exit statement above it. It was just some reminder comment. Will be removed.

About R2 that’s also why I think it needs a separate script.

You’re right, focused on the last line and missed the exit above

As first start a separate script will be fine

some parts i have here:

Script now can build debian. Only tested building, have not run the image yet…

Script can also build from any kernel .git. It defaults now to torvalds kernel. Also have not run this yet, but it should be fine.

Only some issue left with locale on debian, should not be a big issue.

Just used hexdump on the images and some find/replace. The first part of the images are all zeros, so these are not included. Script runs dd /dev/zero first on the whole first block.

But i see you build uboot fip