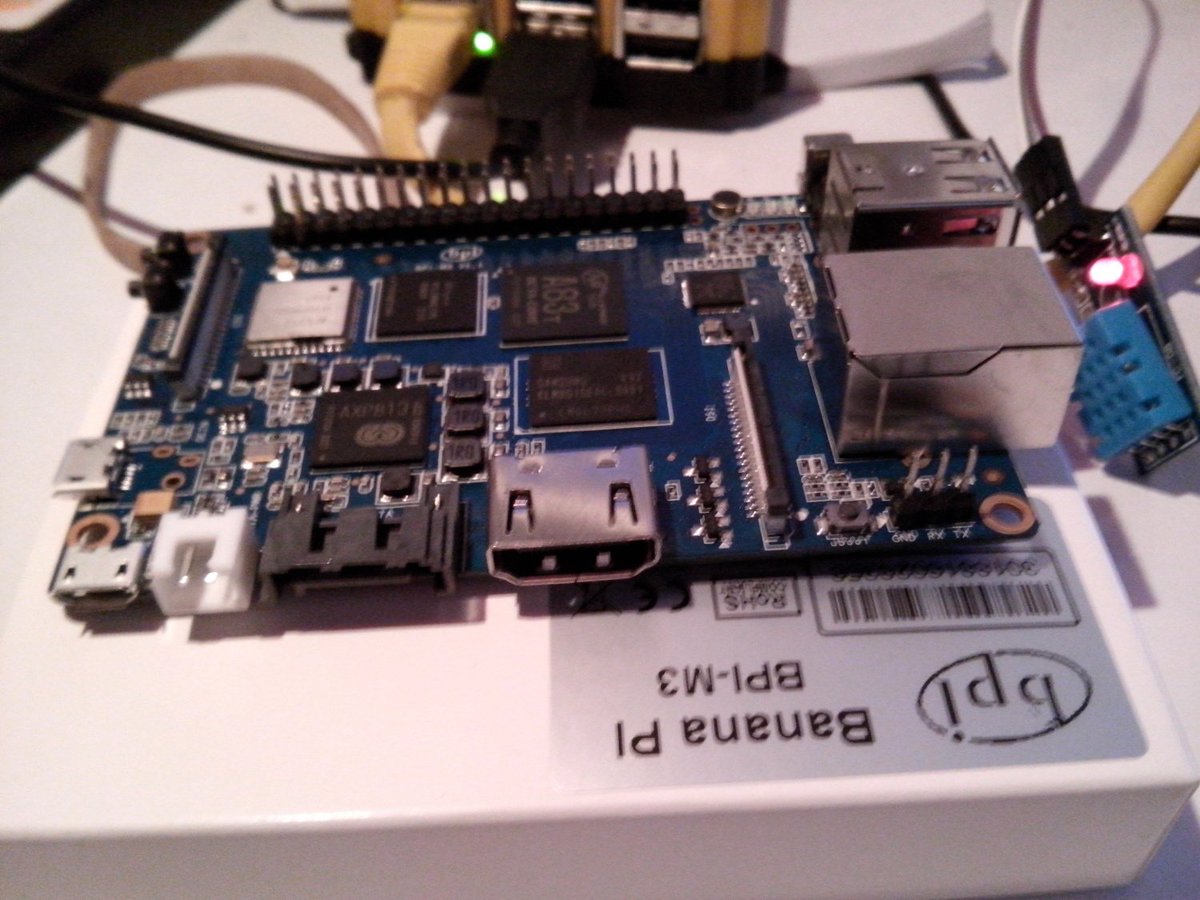 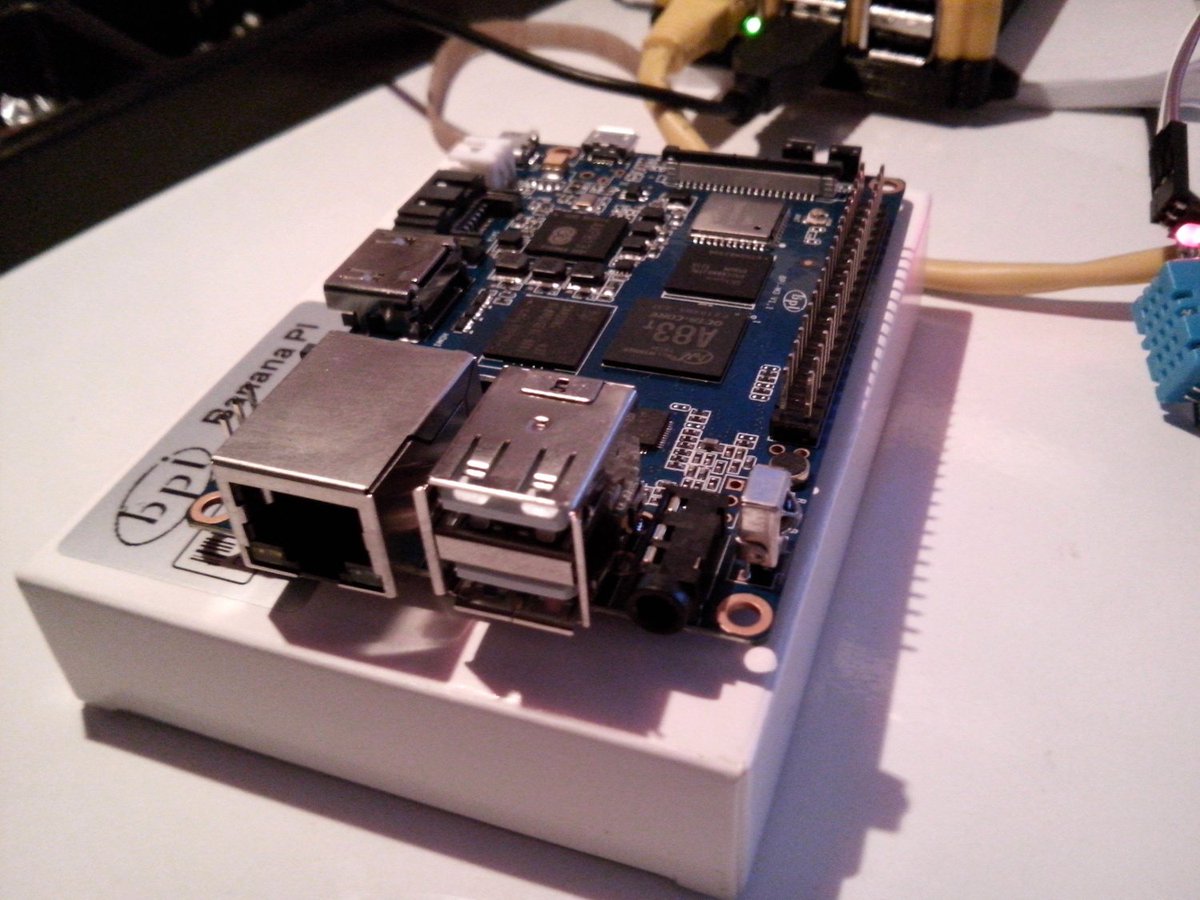 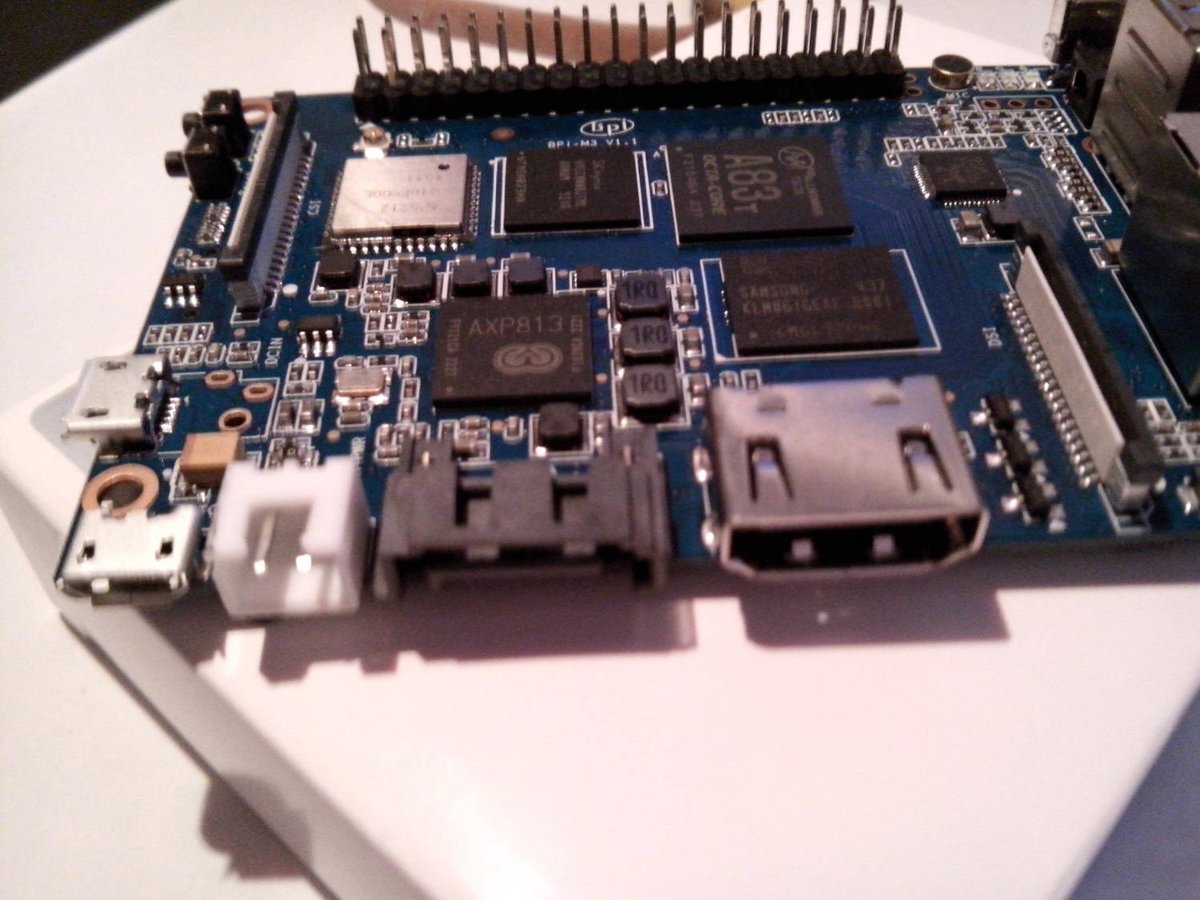 but many maker let us change to micro-USB for DC power.

Most of makers doesn’t realize power limitations of micro USB. You should.

In other words: You – the manufacturer – have not the slightest idea what you’re talking about. Allwinner simply changed the naming and you try to fool your customers as usual: The SoCs are the same and the M3 isn’t worth a look. Gbit Ethernet is limited, the ‘SATA’ performance is horrible, you can’t use the advertised “up to 1.8 Ghz” without active cooling and the board lacks I/O bandwidth. And if you use a fan so that the SoC can clock above 1.2 GHz then your board will suddenly power-off since the SinoVoip ‘engineers’ use micro USB for DC-IN trying to fool as much customers as possible who think they can power their boards with cellphone chargers. It’s such a lousy design…

Wow, what a negativity. It is still so that the Banana Pi M1 is an amazing device, and good luck finding the router variant because it is super popular… Sure, microUSB has downsides but it IS the de-facto standard and why wouldn’t you be able to put 9v/2A on it? Phone chargers do that all the time… I would first want to see this actually fail before I start whining about it.

Anyhow, I’m curious to hear if there are any plans towards a 64 bit device! We at ownCloud are working with Western Digital to create a Raspberry Pi 2 based home server. I already looked at using the Banana Pi M1 instead as it is much faster for this purpose but unfortunately the SATA power plug is in the way so it doesn’t fit the case

I know there’s a project working on creating a Allwinner A64 based board but the A64 is not really great in terms of I/O, perhaps you guys/girls will come up with something

I would first want to see this actually fail before I start whining about it.

Are you able to read and click on links? It did happen to me all the times that I experienced power-offs unless I soldered a sane DC-IN solution using a barrel plug:

This IS reality. Regarding the M1, yes this is a device that is way cheaper and easily outperforms the M3 if it’s about I/O. The M1 and any other A20 based board features a real SATA port, the M3 not. And unfortunately the lousy SinoVoip engineers chose not only a crappy DC-IN solution but also the worst USB-to-SATA-bridge available, the GL830 (also used on the Orange Pi Plus for example and there also limited to 15/30 MB/s maximum).

Regarding A64: Yes, this SoC has the very same limited I/O capabilities as the A83T/H8/R58 we’re talking here about. Also only one USB host and one dual-role port. It’s as limited as the Banana Pi M3 and also not that fast (the A64 relies on 4 rather slow Cortex-A53 cores).

But since you really think about the RPi 2 (only one single USB 2.0 connection to the outside that disk and network have to share) I/O and network bandwidth seems not matter to you at all. Weird.

I would ask the person that did the ODM for the original Banana Pi: Steven Zhao from Xunlong.

I believe he would be happy to design a special edition Orange Pi with A20 for you that meets your requirements.

You are may be new here. To get fast into the topic of SOC /SBC and understand the major problems, read the Google doc in this Posting Sorry, not only read, try to understand.

I dont get why there are so many people complaining about MicroUSB.

MicroUSB can provide way more than the power needed. You just need to make sure two things, good adapter, 2A, and a good cable, Anker or some decent brand.

MicroUSB can provide way more than the power needed.

What are you talking about?! Do you have an M3? Did you verify that this board needs not more than 5V/2A:

I did it. Had so many power-off situtations that the filesystem on SD card and eMMC got corrupted.

It seems the ‘engineers’ never tested that. Understandably: They never used any heatsinks and they never provided performance numbers. Maybe they simply don’t know that their device needs 5V/3A under full load.

Apart from that: micro USB is always crap since so many USB cables are faulty and lead to undervoltage situations when load increases. For charging a cell phone it might be OK (but serious vendors don’t use it for this also since… micro USB is crap). This is common knowledge and the problem existed with the M1 also: http://forum.lemaker.org/forum.php?mod=viewthread&tid=8312&extra=page%3D1

On the left a crappy cable leading to voltage drops below 4.6V at only 600mA consumption (Banana Pi M1!), on the right a better cable with stable voltage:

There are endless discussions in the RPi forums regarding ‘good chargers’ and there 3rd party vendors exist selling PSUs with directly attached cable providing 5.1V… for a reason: Micro USB as DC-IN source is unreliable crap and providing a PSU with an attached cable avoids at least the situation where users choose bad USB cables that are responsible for all sorts of power problems.

Providing a board that needs 5V/3A with micro USB for DC-IN is just moronic.

No I never tested m3. The difference between USB cables is big. With a crap cable my cellphone’s charge time is like 6 hours, but with a good one, its less than 2 hours. So many of the problems are probably caused by crap cables. I guess a DC port may be more stable, and definitely cheaper than a high end MicroUSB solution.

The difference between USB cables is big.

And that’s reason N° 1 why choosing micro USB to power a device (instead of charging it) is wrong. Too many crappy cables and too many crappy chargers around. Using micro USB from the manufacturer’s point of view is just fooling people since they believe they can power the board reliably through crap.

This applies to every SBC using a micro USB connector for DC-IN. With the Banana Pi M3 the situation is different since its SoC alone is able to consume up to 8W under full load. That translates to 5V/1.6A and is just 0.2A less than the maximum rating for micro USB (5V/1.8A). Using micro USB here is just insane.

But they don’t care. And they don’t test responsibly. And they seem to be right with their strategy to sell crap under the Banana brand. The Banana Pi M1 is a great device that received superiour software support (not from ‘Team BPi’ – they were never involved – but from the linux-sunxi community that evolved around A10/A20 devices like the Cubieboards before).

Unfortunately they started to sell incompatible crap like the M2 and now the M3. And trick people into believing devices sharing the same name would be compatible. They aren’t and the situation regarding software support gets worse with every new gadget they try to sell as the next ‘Banana Pi’.

I bet they will not even resolve half of the many the issues like BPI-M3 new image:ArchLinuxARM Lite for BPI-M3 (20151209) (unbelievable – the issue is well known but ‘Team BPi’ simply doesn’t give a sh*t) and will try to sell a Banana Pi M4 based on the slow A64 (‘64 bit’!!!) in a few months again targeting morons like they do with the M3 now. The M3 attracts people due to SATA (Wrong! Only the worst USB-to-SATA implementation ever) and octa-core. But lacks I/O bandwidth and especially software/support.

In many areas the M1 easily outperforms the way more expensive M3. But people won’t learn, they like to buy crap if hardware specs sound good.

Well, it really depends on how you are going to use your BPI.

For general use, headless linux servers, NAS… go with M1.

M3 if you want a mini android device or watch videos, but M3 still didn’t get HW acceleration right, so not even 1080p videos.

But if like you said people buy crap if specs sound good, then they deserve the Darwin award for buying things so they probably won’t care if they can’t do what they want.

Ah I see, it is ready. Like you promised here already, right?
1 month 2 weeks ago Same forum-member name.

The last commit on github is already 3 days ago - are you really developing ?

Ah I see, it is ready. Like you promised here already, right?

“we have try to do kernel 4.1.x on BPI-M3, it can running fine ,but need some time to fixed some issue.”

You can’t believe a single word @sinovoip staff is telling. Always just the usual lies “code is ready, have to optimise, will publish on github soon, give us some time”.

But they’re right since their customers let fool themselves again and again, don’t care and buy boards without useable software… and then

they deserve the Darwin award

i just paid for the banana m3 , i just read some of the post on hear about the board ,wow , did i buy the wrong board , it looks like it has a lot of problems , my be i got back to my raspberry pi 2 …

There is no tutorial about or something about how to chose wich chip board allwinner R58 , H8 or A83T / DC or USBjack ??!

if you want others ,we also can support you.