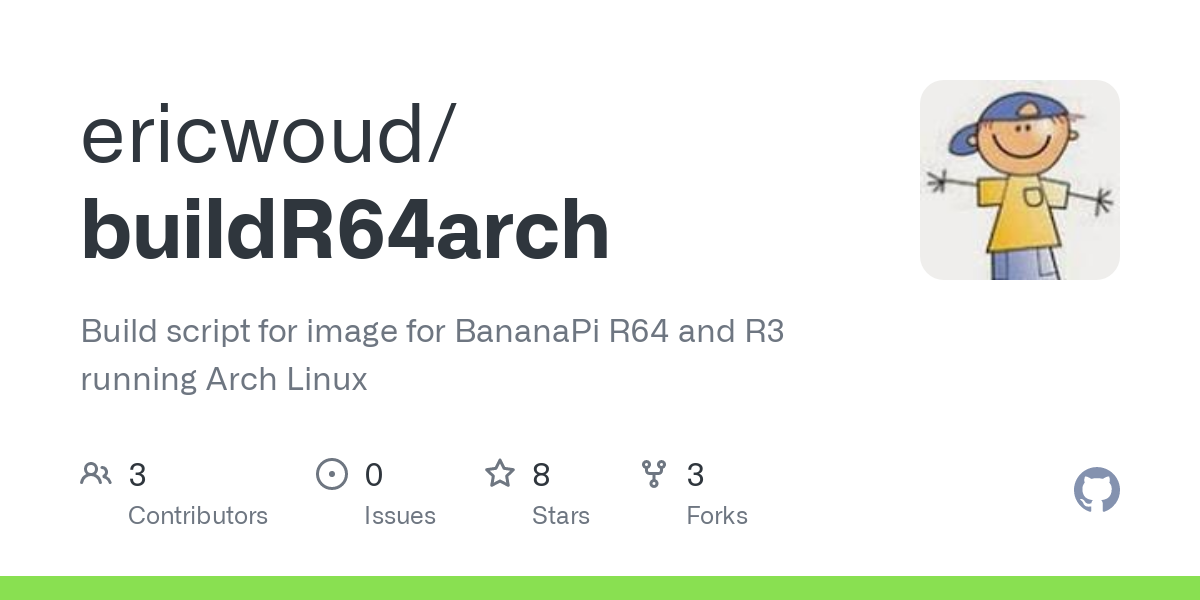 I have pushed the initial version of my new image builder for R64 on github.

It builds an image for running Arch Linux. There is also a pre-build image ready for download, see assets in the release, or the download link located here below. You can use this image as try-out. If you like it, then you can use the script later. I’ve tested the script running on Arch Linux, should work on debian/ubuntu too.

The script only installs packages and configures them. It will therefore not take too long to create an image.

Everything that needs building is pre-built and can be updated through the AUR. Kernel is also a prebuild package, based on the linux-rolling-stable branch. When updating the linux-bpir64-git package in the AUR, it should build the newest stable linux version and install it automaticallty. The same goes for the Arm Trusted Firmware bpir64-atf-git, it is also a package, but it does not have many updates. When installed/upgraded it is automatically written to the correct partition. There is a separate package bpir64-mkimage, which is modified to stretch the image leaving empty space on sectors 2 through 34, so a GPT table can be used without problems.

Devicetree can be edited on the spot through devicetree overlay sources, one command to save changes: bpir64-writefip and then reboot with the new devicetree.

Note: With the emmc version, wan only works with bootswitch set to boot from emmc first! (see closed issues buildR64ubuntu)

In the latest commit updated hostapd.conf for better performance.

I found a problem, a bug in an update… Script still in development… Building from script should be ok now, after a bug fix, not writing the ATF.

Now you can build an image that actually boots

@Keks Did the script run ok on your system?

There is no dns server installed, The DHCP server gives the client DNS=8.8.8.8. It is the simplest setup. From this simple setup, it is up to every user to implement the setup by his/her choice. The goal is to keep the install script as clean and simple as possible.

The script runs without any errors, expect the few changes and the additional hint in the Readme we sendend you as pull request. The only strange thing is that mounting no longer works properly after executing the script once. So far, I have only been able to fix it with a restart… The problem with “system halt” persists.

I had the same problem at some time, but haven’t been able to pin down the problem, yet…

Does the bpir64 boot now with a fresh build?

We tried it out for several times, also with a brand new SD-card. However we always got the “System halt” message and the bpi does not boot correctly. Is there anything in the output of the build.sh script that may be helpful?

My guess it is that the ATF is not written. I need to check if it happens here with the latest version. The Arm Trusted Firmware is also installed/updated via a package. After installing/updating the package the correct version (emmc/sdmmc) is written automatically to disk.

You could try reinstalling ATF

Now the bpi seems to correctly jump to bootloader. However we still get an error message

Output of the bpi at boot:

So now ATF seems ok, although there have been quite some updates on the ATF github repo recently. I need to check, but it seems going ok.

Now it seems it cannot find the linux kernel image file, so try reinstalling it also:

Try it with the older ATF:

Copy it to the root of the SD card, BPI-ROOT partition.

Then install with: (forcing it, as it is an older version)

If this boots successful, then you can remove the package (boot partition is still written) to prevent it from being automatically updated. However, I need to put the fiptool in a separate package, so you cannot do that yet. Updating Linux package needs the fiptool.

The boot process now seem to be okay. However, after boot the bpi randomly freezes and reboots after a while. Sometimes I manage to log in before the freeze, sometimes it happens before the login. Because of the freeze, I have unfortunately not yet managed to output the error messages with journalctl.

Then apply the same trick and install an older kernel:

If this helps, then change /etc/pacman.conf:to prevent the packages from being upgraded.

Don’t really need the headers, you could remove the package entirely.

Error is from bl2 when trying to load fip (uboot+bl31) so atf is working partially. Second part cannot be loaded…kernel is far away as this is loaded by uboot

Found out why ATF and kernel are not written to partition at image build time. Fix coming soon.

In my image ATF loads the kernel.

One could change /boot/bootcfg/linux to the path to a uboot image instead, if one must use uboot.

Sadly we still have the problem with the system freeze and a restart afterwards. Certainly the time until we get the freeze increased up to a few minutes. So far, however, we have not been able to identify any real correlation. The freeze currently seems quite random. Also journalctl does not really help…
Just a guess that it might be related to /media/emmc. Below a snipped from the journalctl before the freeze (in this specific case we got a core dump after the command “du”):

Maybe also this message could be a hint:

What you show from the log there, you could disable by removing from /etc/fstab:

But I think it has got nothing to do with it.

What is the output of uname -r ?

This message can be ignored. Older sd cards had a readonly switch (you can see it on most adapters). Microsd have no such switch.

Do you have any hardware plugged in?

Could you clone the script so you have the latest commit. Then change

Then you get the older packages installed.

Then ./build.sh -SD and format again. Then run the script ./build.sh -r … The atf and fip partitions should get written now on first go. Grep from your pull request is also fixed.

I’ve changed the script according to your suggestions. To run the script with this change I only needed to remove the mmc-utils package because it was not downloadable (http-request 404). But I’ve seen that it is not needed in this case. Sadly the freeze still persisted. uname -r gives 5.18.16 as expected.

According your question above regarding additional hardware I realized that I used the wifi-module MT7615. I removed it to test if it helps somehow. And yes it helps, at least the software freeze has gone and the following log has revealed:

I was wondering because this module was the whole time attached (as well as with your old ubuntu-based script) and there no software freezes occured. Then I remembered that you’ve added further packages and enabled wifi-related services e.g. the hostapd-service. So I disabled the hostapd.service and the nftables.service. Then I attached the Wifi-module again and rebooted. Now it’s running without any freeze up to now.

I would propose to add such “user-specific” services optionally and let it on the users own to enable them. I will investigate further because I want to use the bpir64 as an AP. If I have any ideas for improvement I will send you a pull request in git.