I was trying to figure out how to improve BPI R2 network performance and I stumbled upon this article https://www.spinics.net/lists/linux-doc/msg02975.html

I tried to configure RPS and I it actually worked. The result was really surprising. I got from 600Mbits to 940Mbits. In addition… the CPU load is now at 1%, instead of 100% for core0.

What RPS does, as I understand, is utilizing other CPU cores instead of one that is being interrupted.

BTW Thank you frank-w for your work for community!

Did you test this with iperf or did some speed tests on Internet ?

I enabled RPS in my BananaPi-R2 box and did some Internert speed tests and indeed I saw some improvements. Before the speed was aroun 185Mbps and after it increased around 240 - 250 Mbps.

I have a gigabit connection 500 Mbps download / 250 Mbps upload.

I was testing it with iperf.

One computer had IP 10.128.0.10 and the other had 10.128.1.10. The only way I was able to achieve full Gbit without RPS was when I had both computers connected on the same interface using bridge. With RPS I had 940Mbit, like I wrote in the first post.

I think, that the main problem is, that the NIC has only one queue and it is interrupting only first core, which is by default the only core that performs routing. But because it gets interrupted all the time, the process of routing is slow. By moving the logic of routing to other cores, the performance improved to a maximum. At least that is what I think is happening.

Anyway, I am glad that it helped!

EDIT: RPS is not being persisted, so I have to enable it every time in post-up

I also have 500Mbit download, so I tested it. With most servers, I couldn’t achieve more than 250Mbit, but there are some that support more. I live in Prague and used “ISP Alliance”. With that, I achieved 443Mbit, but I think that the bottleneck is not BPI, but the server / ISP.

LAN0 is my main router, LAN1 is my notebook. I don’t use NAT on my BPI, just routing. I see now that you are using LAN0 as WAN port. In my case all 4 LAN ports are bridged and I use the separate WAN port for Internet connection.

Right now I’m using NAT and I’m also behind another TP-link gigabit router which I plan to get rid off soon. I think this might also slow down download speed. From that router I can reach up to 480 Mbps to some close servers. 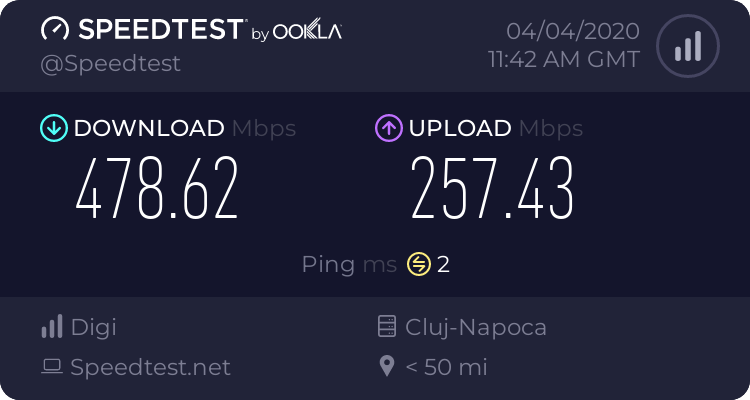 Also what distro are you running on the BananaPi-R2 ? I’m using a self made Debian Buster image.

I used WAN instead of LAN0 and replaced computer on which I was testing. I used more recently bought NB with Windows. Results were more consistent and I got the same results when I was in network behind BPI (10.128.0.1/24) as when I was connected to local network of my main router (192.168.0.1/24) This is a result from network 10.128.0.1 (behind BPI) when using WAN. But like I said, our results are not comparable, because I don’t use NAT on my BPI, but on my main router. R2 should have HW NAT, so I don’t understand where you lose bandwidth. R2 should have HW NAT

hw nat is only ported to 4.9 and 4.14 (where it is reported as unstable), later kernels do not have hwnat-driver

I tested performance with software NAT. The higher CPU utilization is visible, but R2 with RPS still handles it pretty well. You need to have RPS for all active inerfaces.

EDIT: I found out very interesting thing. You need to assign each interface it’s own cpu core for best performance. For example… if I had 2 different networks behind wan and br0, I would have to assign a different core for wan and different core for br0. I updated my config below. wan uses core1 and br0 uses core2. If I had one more network, I would assign it core3. If I used NAT on WAN, I would give it more CPUs, so instead of echo 2, for core1, I would put echo 6 for core1 and core2. Then core3 would be left for br0 which you can set by echo 8. Here is my /etc/network/interfaces

I did a new speed test using recommendations from @daniel.vrsek and applied the below commands:

Initially all RPS values were 0 for the WAN and bridge br0 interfaces and I got maximum 210Mbps on the speed test.

After applying the below 2 commands the speed tests greatly improved as shown below.

For those using systemd-networkd to make these values permanent you need to create a systemd service (I called it rps-enable.service) with the following content

and then enable to service to start at boot

Hope this will help someone in the future. Thanks again @daniel.vrsek for advices.